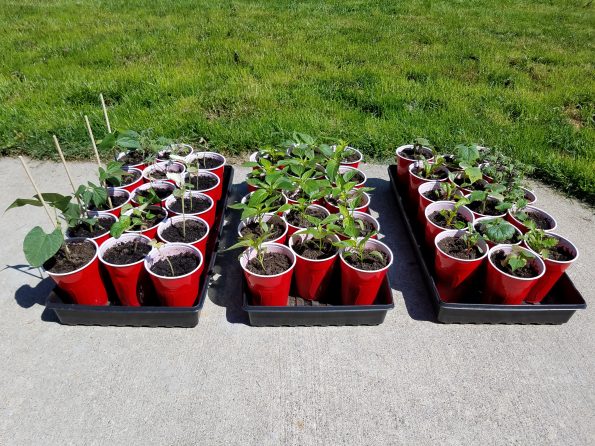 Hello and thanks again for checking out this week’s update. Last week I moved a majority of the plants over from pods to solo cups. We’re nearing the middle of May and I’ve started hardening off everything.

The plants are doing great for the most part since transplanting to the bigger cups. Especially the peppers and beans.

Most of the okra wasn’t doing so great to begin with, and they’re still not. After transplanting they seemed to be picking up. But over the past few days, they appear to be on the decline.

Apart from the okra, everything else is coming along very well. My goal is to allow the plants to expand their root structures over a period of a couple weeks while hardening off.

What is Hardening Off?

Hardening off is a process for seedlings that are started indoors. Plants started this way are typically very babied so as to ensure their early growth. Putting them straight outside into the ground could shock them too much and cause them to die. So we want to gradually introduce them to their new environment.

There are a few methods to hardening off. The one I’m following is to simply set my seedlings outside for a few hours each day. By doing this I am acclimating them to the normal outdoor climate.

A general consensus says to place them in a shady area. Mine will be planted (mostly) in full sun, so that’s what I’m trying to get them used to.

As the days pass I will gradually increase their time outdoors until they’re ready to go in the ground. They’re always brought inside to sleep though. We’re still getting frost overnight here. More on that later…

Everything is being changed right now. Up until the past week and a half or two weeks, the plants have been receiving light during the night hours. Now I’m gradually moving the light timers forward every other day. As of now, they aren’t coming on until 5 AM.

Around 10 AM they are being moved outside to begin adapting to normal conditions. I try to bring them back inside to “sleep” around 3ish PM. Of course, I don’t put them out if the weather is bad. Fortunately, it’s been pretty nice lately. 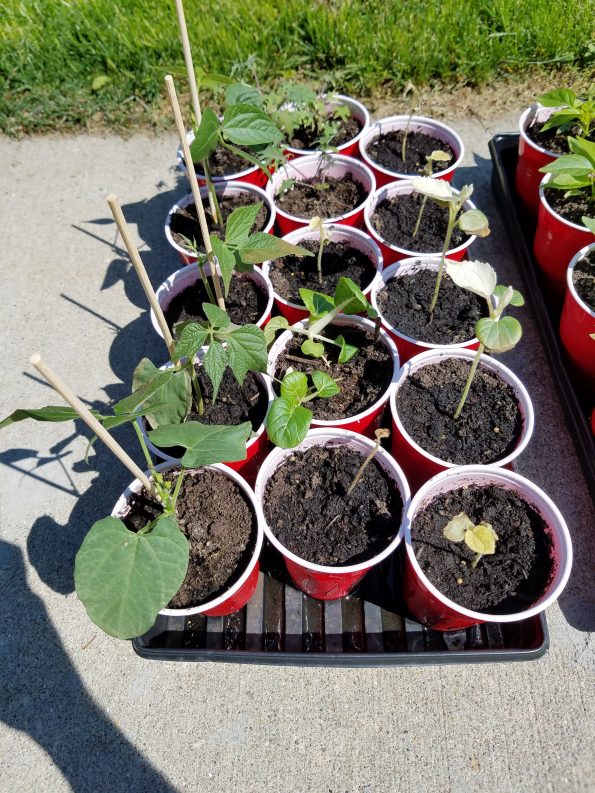 It doesn’t surprise me at all that the Garden Beans are doing well. But it is rather disheartening to see the Okra that had been doing so well is dying off. Even the bigger sprouts’ leaves are beginning to curl.

The Pak Choy was moved into one of the containers that an Okra stalk had totally fallen over. It’s doing well, so I will probably move over more of them to replace the weak Okra.

I had planned on buying certain plants this year, including tomatoes, and now it seems Okra will be going on that list as well. Still not certain as to what else I should get as grow space will already be scarce. 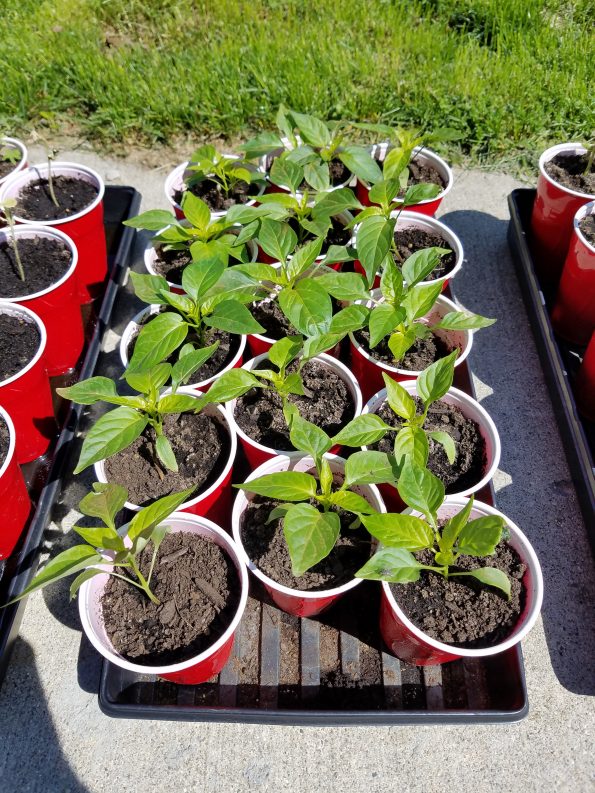 These 15 Scotch Bonnet peppers are all doing exceptionally well. Every day they seem to be getting bigger. This pleases me and I am looking forward to making some killer Carribean style hot sauce.

I have a place designated for peppers that worked very well last year. About 3 weeks ago I put some Jalapeno seeds that had sprouted in the ground here. Unfortunately, none have come up. But it wouldn’t have mattered anyways…

So now I’m a little further behind than I want to be concerning Jalapenos, as well as Cherry Bombs, Habaneros, Cayenne or other peppers I wanted to grow. Guess I’ll have to buy a few pods of those as well. 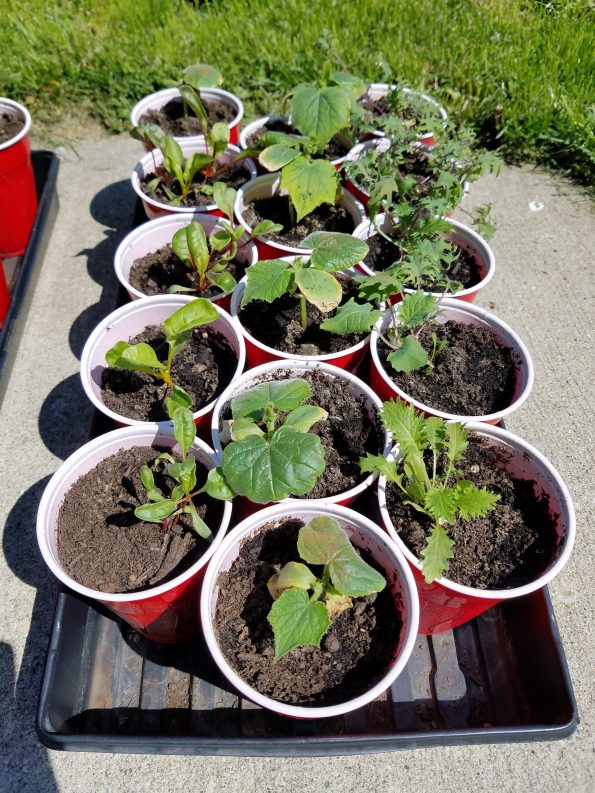 When transplanting the Swiss Chard over to the cups, I thought it’d be a gamble. They just weren’t looking very well in their pods. But now they’re coming back and looking good.

The Cucumbers are growing much more slowly than I anticipated. They may have become root bound in their pods, which probably stunted their growth. Hopefully they will pick up soon.

All of the Lettuce and Kale are picking up great. I have a feeling there will be much more of this than we’ll be able to eat. 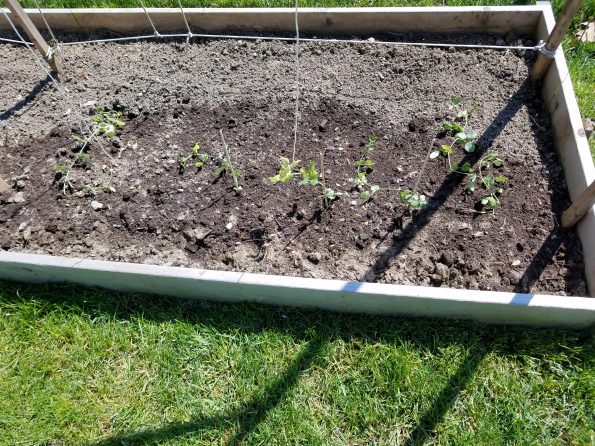 The Sugar Snap Peas have already been put in the ground. I dropped some line for them to climb, but I didn’t cut it long enough. So I’ve just been letting them creep along the ground.

As you can see, the line on the other side of the grow bed is done correctly. I did that last year and it’s for the Cucumbers. Totally should have done that with these. 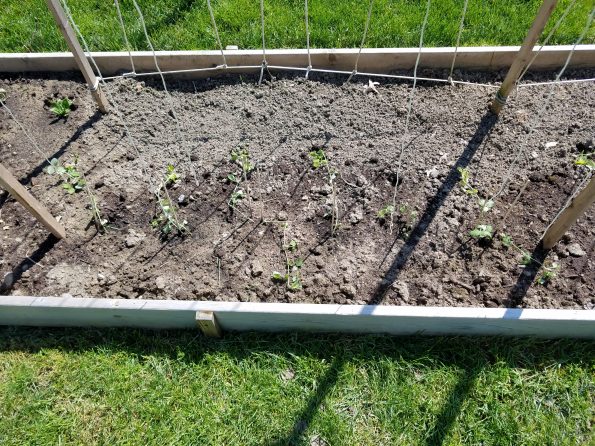 I’m not certain how well they are taking to being outside yet. They were hardened off earlier than the rest of the plants. Although, they probably could’ve gone through the process a little longer.

At least one has died and been pulled up already. Hopefully, no more will be lost. I’m really looking forward to eating these. 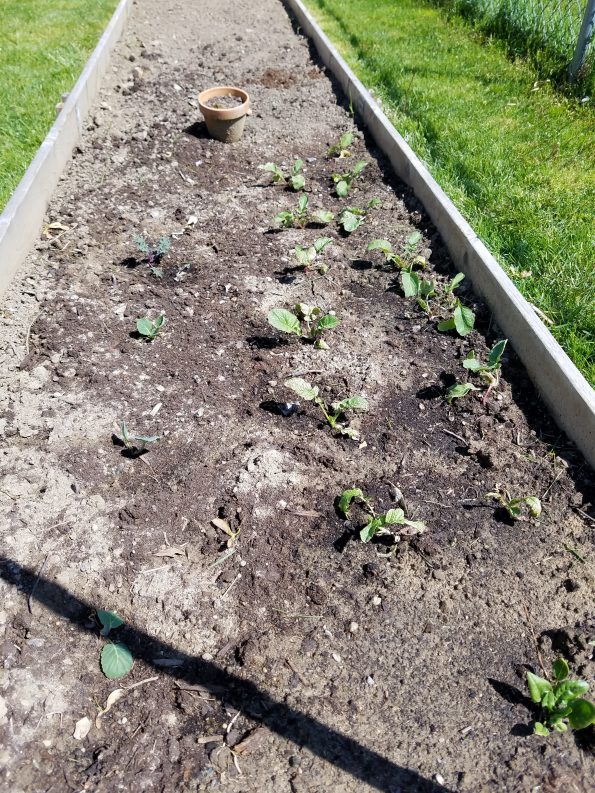 The Radishes never went through the process of hardening off. Rather I simply put them in the ground. The Collards, Kale and Spinach were from the first round of seed starts. Somehow they survived damping off and being put straight outside.

Eventually, the Radishes will ready to pull up. Not exactly sure what will go in after they’re gone, but I will be grateful for the grow space. Perhaps more radishes will go in. They are a high-turnover crop. We shall see, I suppose.

If you’re wondering why there is an empty pot sitting in the middle of the raised bed, it wasn’t empty a few days ago. I put all these plants in the ground on Saturday, May 6. When I came inside that night I had a freeze warning on my phone.

There was a Scotch Bonnet in that pot. It wouldn’t fit in the tray with the rest so I put it outside to see what would happen. Well, I brought it inside the night of the freeze warning but didn’t the following night. And that’s when we had frost, and it died… ugh.

The rest of the plants in the ground are frost resistant. For that, I am very grateful. Definitely still waiting a little bit before putting everything else outside though.

Thanks again for stopping in to check out this week’s update. Please subscribe for more updates from Grow To Save!